A treasure for book lovers and citizens

Calgary Central Library is an important hub of public life in Alberta, Canada. The architects designed an extraordinary building that pulls citizens and visitors in.

Each year, the New York Times sends a reporter to 52 different locations worldwide to write a weekly travel column. At the end of 2019, the reporter made his way to Calgary, Canada, and waxed lyrical about the city’s new public library: “the building is a stunning oval of snowflake-shaped windows and arching wood, welcoming pedestrians from multiple directions”.

Calgary Central Library was designed by the architects at Norwegian firm Snøhetta and Canadian architects at Dialog. Their joint design established the library as an important public building in the city that’s intended to serve future generations too. Four years of construction have resulted in a building offering 22,300 square meters of space for reading, learning and togetherness.

The design juts out above the inner city transit line in an almost supernatural way, drawing visitors into its depths. The building was given a curtain façade with some elements prefabricated and some poured in situ.

The Lafarge Calgary Precast plant poured the concrete elements that were used as architectural concrete on the façade. Together with the architects and RECKLI’s American subsidiary US Formliner, the team developed the idea of prefabricated concrete elements with a wood texture. The architects opted for 2/163 Fraser, a horizontal texture with a wooden board effect from RECKLI’s SELECT series. The boards are jumbled together unevenly, creating a living image on the façade. To comply with a special request from the architects at Snøhetta, US Formliner edited the widths of the boards to a consistent 89mm. US Formliner delivered 6 elastic textured formliners for the production of the façade elements. 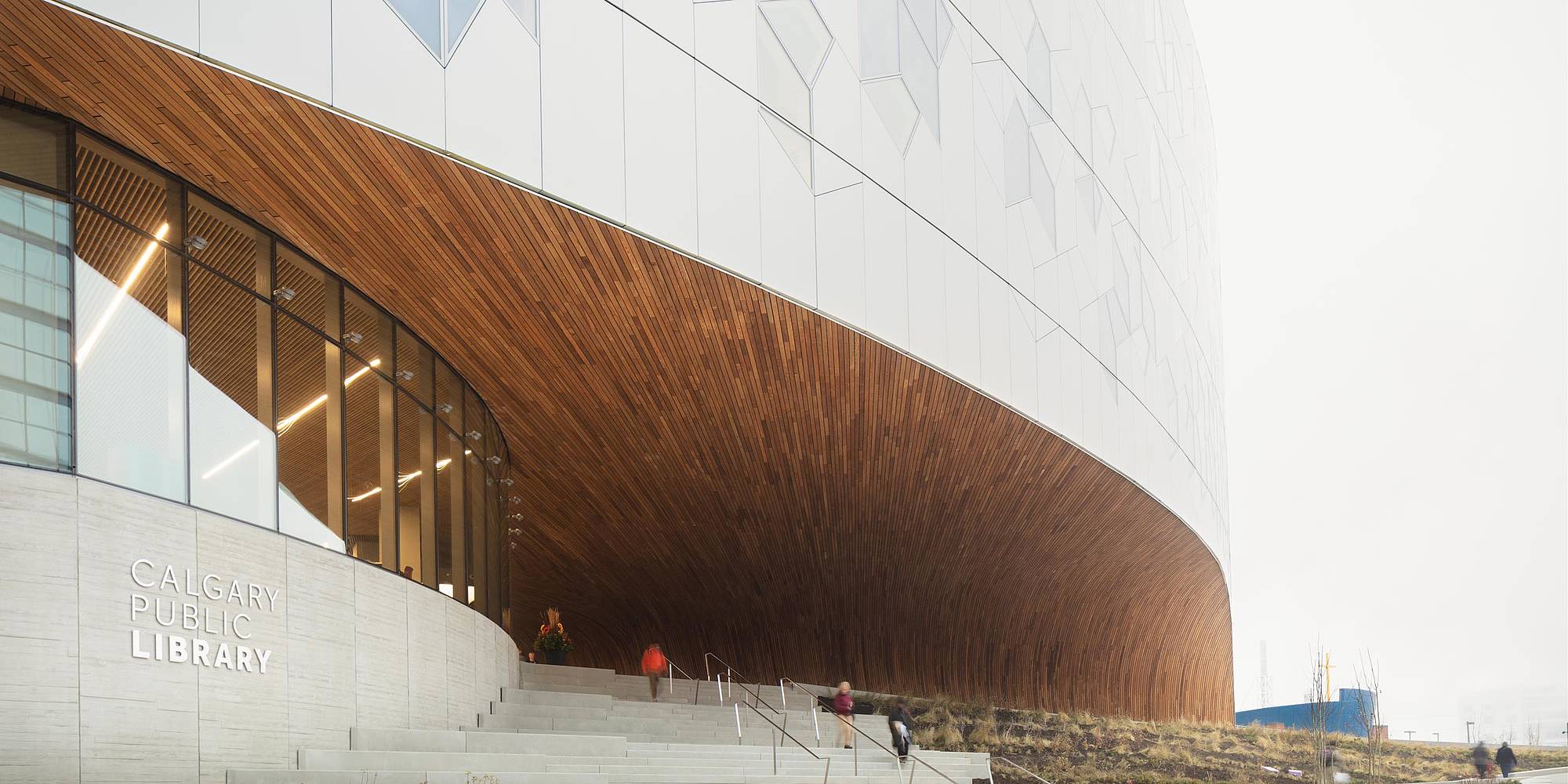 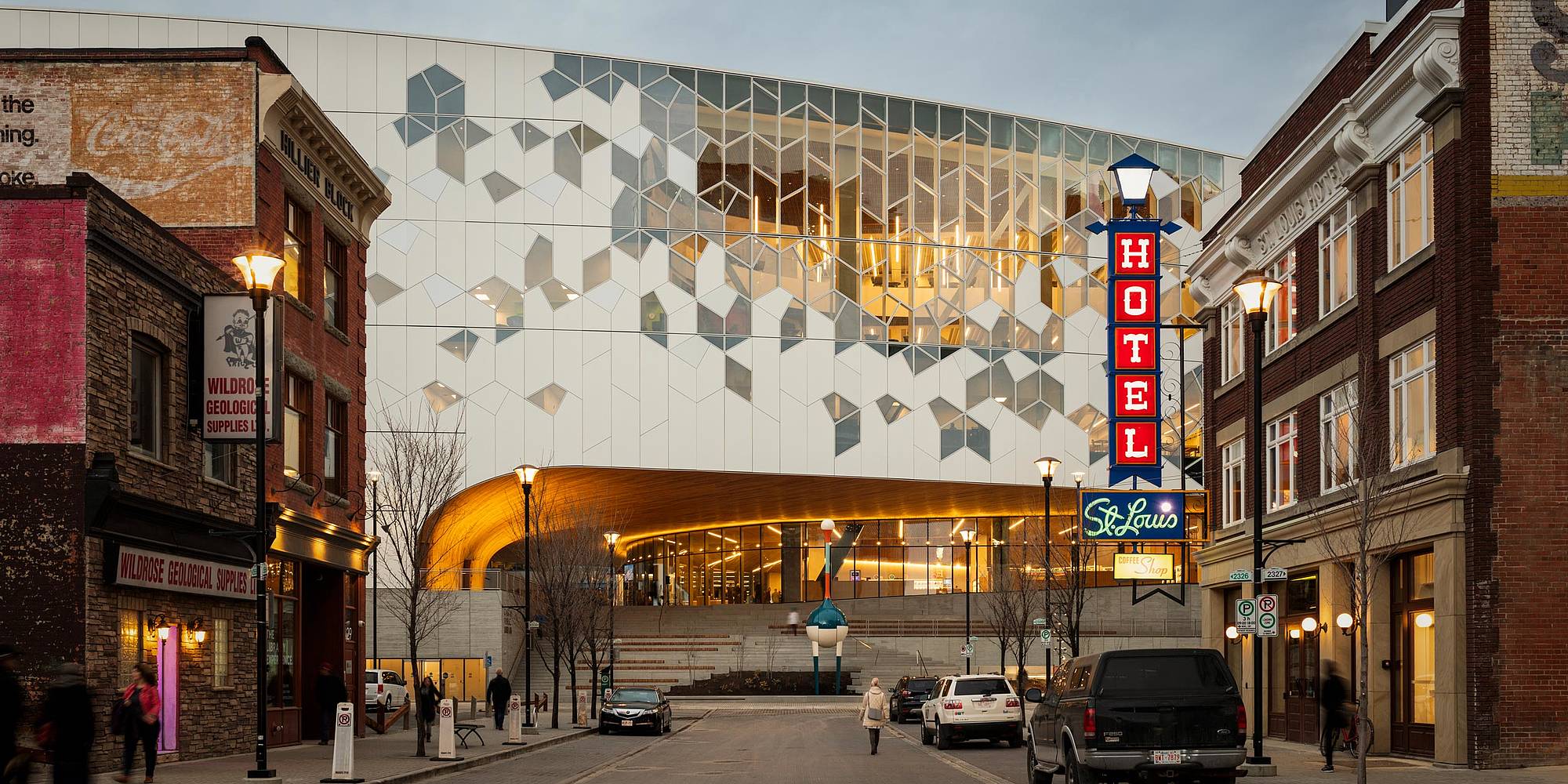 Lafarge Calgary Precast produced 171 precast concrete elements with the selected motif. The elastic formliners were placed into the forms for concrete casting. There was a slight delay in production after what was meant to ease the production process brought an unforeseen complication: The precast plant glued wood to the formliners with silicone to cast as a barrier. After the wood was removed, the silicone left almost invisible residue that nevertheless imprinted onto the concrete. The team ordered three additional formliners and resumed work without silicone adhesive. No further complications arose.

The façade elements for Calgary’s library were stained once dried to give them a medium gray finish. Around 1,400 square meters of the façade were clad with the wooden board effect precast concrete elements. They stretch across the ground floor to optically stand out from the surrounding façades.

The façade features triple glazing and aluminum, and the panels are arranged to create modular hexagonal textures. Parts are reminiscent of open books, connected houses or snowflakes. This pattern is repeated across the whole building so there is no front of the building - it surrounds the whole library.

Inside, the long curved passages along the foyer are clad in wood, while generous light ensures a bright, inviting atmosphere. Concrete columns along the passageways are based on ancient Greek architectural stoa, among which people met to discuss and hold intellectual debates.

The common areas along the foyer gradually lead to quieter learning areas. At the northern end of the library, there is a common room: the large, warm common area sits directly above the transit line and is visible from outside, creating a connection and inviting passers-by to enter.

Stay in style, travel without a care
At the Ibis Styles Hotel at Budapest Airport, the…
Read more
<