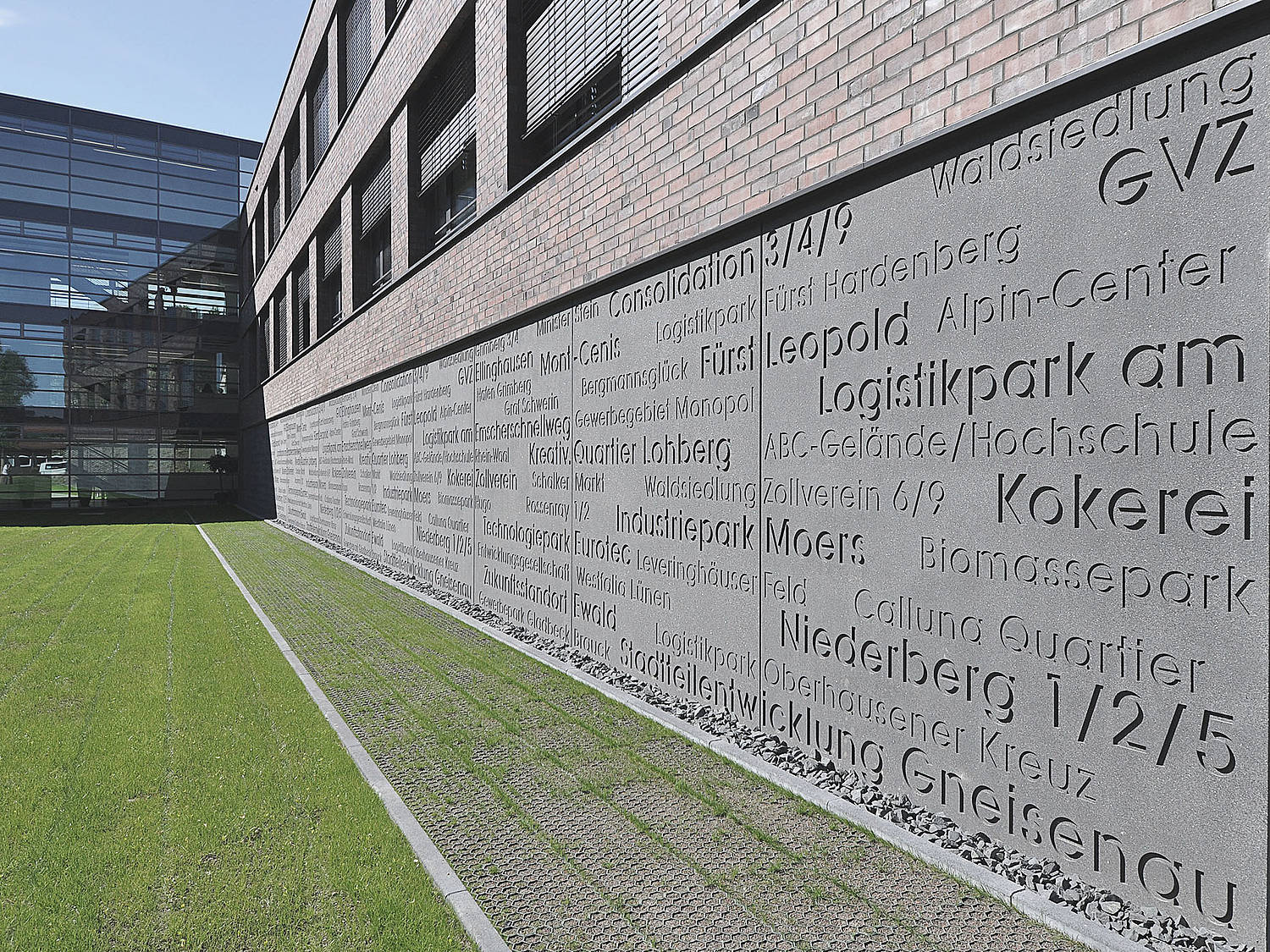 Property company RAG Montan has revitalized the Zollverein area of Essen. This includes their new company headquarters, for which the company opted for a special façade detail.

The last shift at the Zollverein cokery in Essen was in 1986. For some time, RAG Montan Immobilien has been working towards revitalizing this historic area, which boasts the unusual address “Im Welterbe” (meaning “world heritage”). They made a start by completing their own company headquarters, costing 19.5 million euros. The project’s aim was to merge various locations with various offices and departments in one central location. Furthermore, this was the starting shot for other companies to settle on the plot.

The two-part new build with a glazed cross section boasts plenty of offices and conference rooms and can accommodate 250 employees. The two and three-story building complex was designed by Bahl + Partner Architekten DBA (Dortmund) with a traditional red brick façade. One special design highlight on the building is the curtain wall over the base, which is made up of exposed concrete elements that carry the names of all projects carried out by the property company.

In the center of both buildings, there is an attractive and open stairwell that also serves as a communication hub for employees. Jürgen Bahl, the architect responsible, explains: “The aim was to create an area that encourages interaction between employees. It’s already clear that these spaces aren’t just enthusiastically used during break times.” As well as office spaces for administration staff, the new building also offers plenty of high-end conference rooms for customer meetings.

The interior courtyard of this new building has an unusual architectural accent. In accordance with the architects’ plans, it is home to a sophisticated curtain wall made from high-quality prefabricated concrete. The names of all RAG Montan Immobilien projects - each a combination of the historical and current name - have been worked into the material. For example, these include “Logistikpark Fürst Hardenberg” and “Gewerbegebiet Monopol”. “The idea was to use key names from RAG’s past that are well-known and well-anchored in people’s minds, creating a permanent souvenir, and to live on as a brand thanks to the new names,” said Jürgen Bahl.

The base curtain wall was produced by the prefabricated concrete specialists Hering Bau in Burbach. A total of 32 base elements were produced, each measuring approx. 3 x 2.7 meters. For the façade, the designers opted for an anthracite-tone concrete with glittering labradorite. The concrete surfaces were acid-treated to finish. The top layer of fine mortar was removed using a special gel, which artificially roughened the surface for an especially high-end look.

Carving out the letters was particularly challenging. The use of elastic formliners ensured that the writing was precisely reproduced in the concrete and that the letters didn’t break when the case was removed. “The use of elastic formliners facilitates sharp edges and easy uncasing without damaging the concrete element,” said Svan Kosjak, Application Technician at RECKLI. When producing the elements, the greatest precision was required to ensure production was accurate right down to the millimeter. Günter Hass, responsible for production at Hering Bau, explains: “the lettering flows from one word to the other, the distances between the letters vary and they range from 0.5 to 1 centimeter in depth. There was even some writing that ran over multiple concrete panels. Letters had to be arranged so that there were no joins in the transitions that could jar the eye.”

To showcase all projects, the team needed three different concrete elements measuring 9 meters long in total. The elastic plastic formliners made for easy removal. This meant that the elements could be reproduced as needed. “As the formliners can be used again and again, this kind of architecturally unique project can be economically viable,” said Kosjak.

The façade of the building’s base was planned as a curtain wall. As the final brick façade was already constructed at the time of installation, the exposed concrete elements had to be installed using a forklift. To this end, the panels were placed against the wall and secured with wall anchors. The insides of the letters ‘O’ and ‘A’ were left out when the concrete was poured so that fittings could be secured within the holes. The Hering plant produced round caps for these areas, which cover the fittings and make them almost impossible to see.