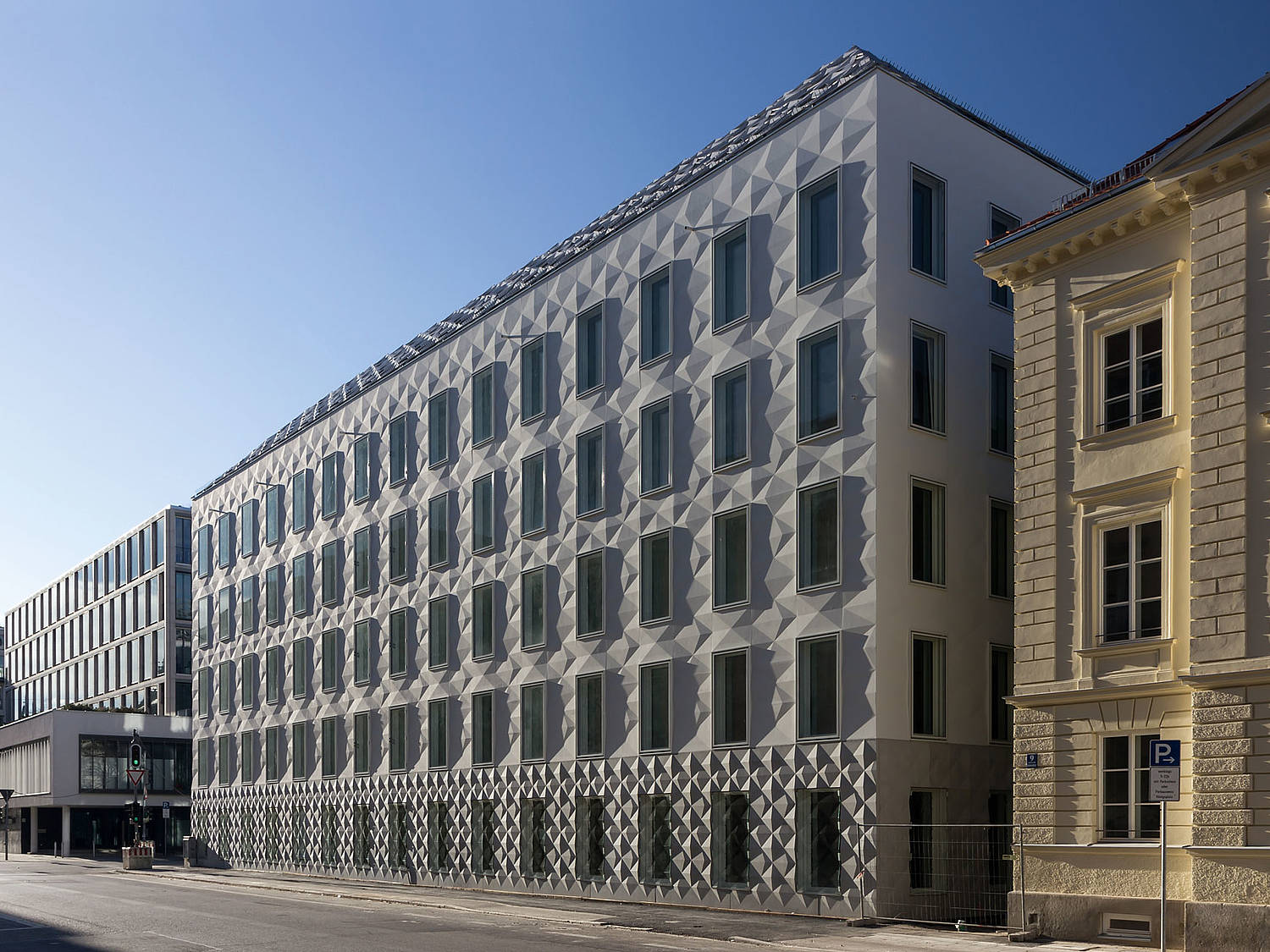 The sunlight playfully dances across the three-dimensional façade. The multi-edged surface lets the structure on Katharina-von-Bora street in Munich assume the appearance of a folded sculpture. The extension building for the Evangelical-Lutheran Regional Church office in Bavaria presents itself as modern and contemporary without appearing as a foreign body next to its neighboring 90-year old main building.

Nearly two years of construction were required for the building expansion. 5,700 square meters provide enough space for all offices of the Regional Church which had previously been dispersed all over the city in small offices. More than 100 employees work in more than 90 offices. The new building is connected to the main building by passages.

Visually as well, the new building forms a bridge to the adjacent building: the architects from Saarbrücken, Wolfgang Lorch and Thomas Wandel consciously focused on the the existing object of 1929 in their design and translated building style, proportions and façade composition into a modern version. Moreover, individual elements make the building into an eye-catcher: the honeycomb-like steel roof and the three-dimensionally folded façade let the extension building literally stand out from the street lining. Annekathrin Preidel, President of the Region Synod, especially admired the »breathing« steel roof at the opening ceremony. She described the fractional and folded construction as the »crowning achievement of the new building as it seems to disperse up into the heavens.«

To shape the extraordinary façade, the decision was made to use the elastic formliners by RECKLI. Thanks to their elastic shape, the molds can mount any thinkable motif on to the façade and depending on the type, are robust enough to be re-used up to 100 times. Once the desire for a pyramid-like surface with a smooth pattern was made, RECKLI’s in house carpenter's workshop manufactured a model of the design in close cooperation with the customer which corresponds to the later surface: the positive cast. An additional seal ensures an especially smooth surface.

After the customer hand-over to the customer, the pattern was milled with a CNC-milling machine in a panel material. The 2-component polyurethane elastic formliners that were developed in-house, were cast onto it. During the hardening process, the pattern of the positive cast molded into the formliners.

RECKLI delivered the formliners to the precast plant LANG (located in Austria); there, the elastic shapes were directly glued and concreted and thus stamped the pattern into the concrete elements. Once they were delivered to the construction site, the elements were mounted to the subsurface. In the run up to this, an own statics reports had already been produced to calculate the weight load of the decorative outer shell. As an anti-drop protection, the elements were additionally attached with grouted anchoring into the wall.

The building’s features do not take second place behind the exterior in any way: a geothermal plant, thermal insulation, thermal-insulation optimized windows and façade surface as well as building materials that are especially low in harmful substances. These all ensure a great sustainability and environmental compatibility – at such a great level that the building even fulfills the gold standard of the German Sustainable Building Council.