When building bridges, many factors must be considered – and these can quickly eat into your budget. The use of formliners can be a great value alternative.

There are many uses for elastic structure formliners.

Because they are so flexible, they can be used for concrete parts of complex structures, such as bridges.

Due to the fact that they can be reused, elastic structure formliners can be a cost-saving alternative to working with other construction materials. This is especially true when complying with conservation regulations.

Formliners were used in the renovation of the Höllenbrachbrücke Bridge.

The bridge cut across Höllenbach and Landstraße 409 on the A1 between Remscheid and Wermelskirchen.

As part of comprehensive renovation work, the edges of the 22 bridge arches were replaced due to weather damage and aging. The arches had begun to crumble and had become a danger to both pedestrians and motorists using the Landstraße underneath the bridge. Due to practicality and cost, the architects elected to replace the existing stone blocks with exposed concrete to create a natural stone effect. The challenge lied in the fact that the visible parts and underside of the bridge’s arch had different textures.

In order to replicate the original look as closely as possible, the two different textures were modeled and presented to the Preservation Office. Once approved, the formliners were created. In the precast plant, the angular edge blocks were poured individually, then finally assembled on site like Lego blocks. 64 visible concrete blocks formed a 82 foot long bridge arch. 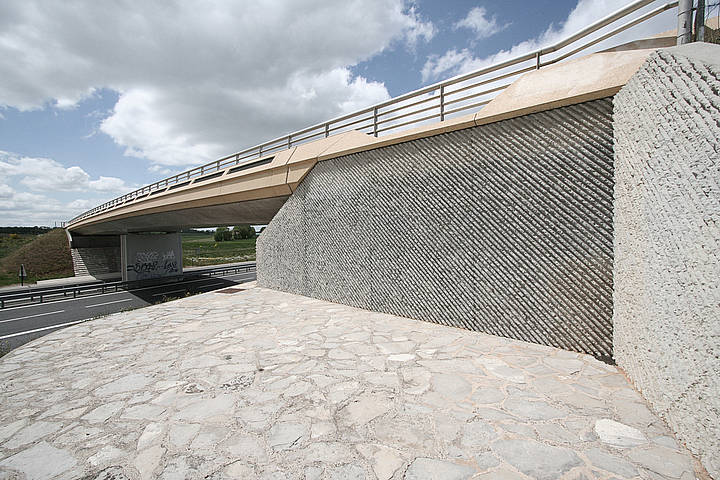 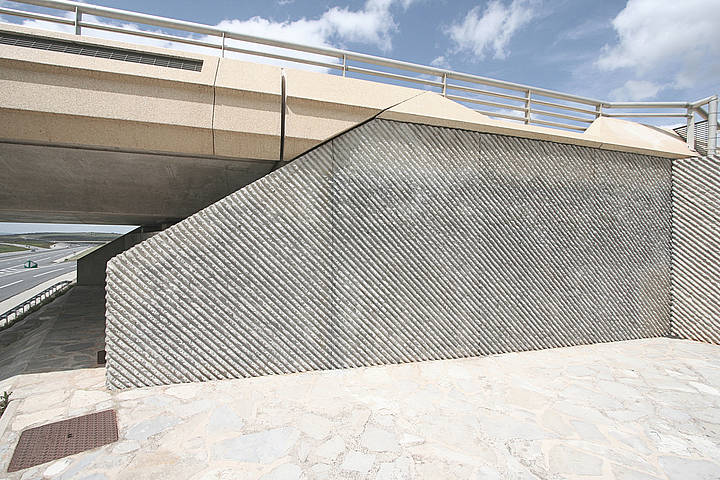