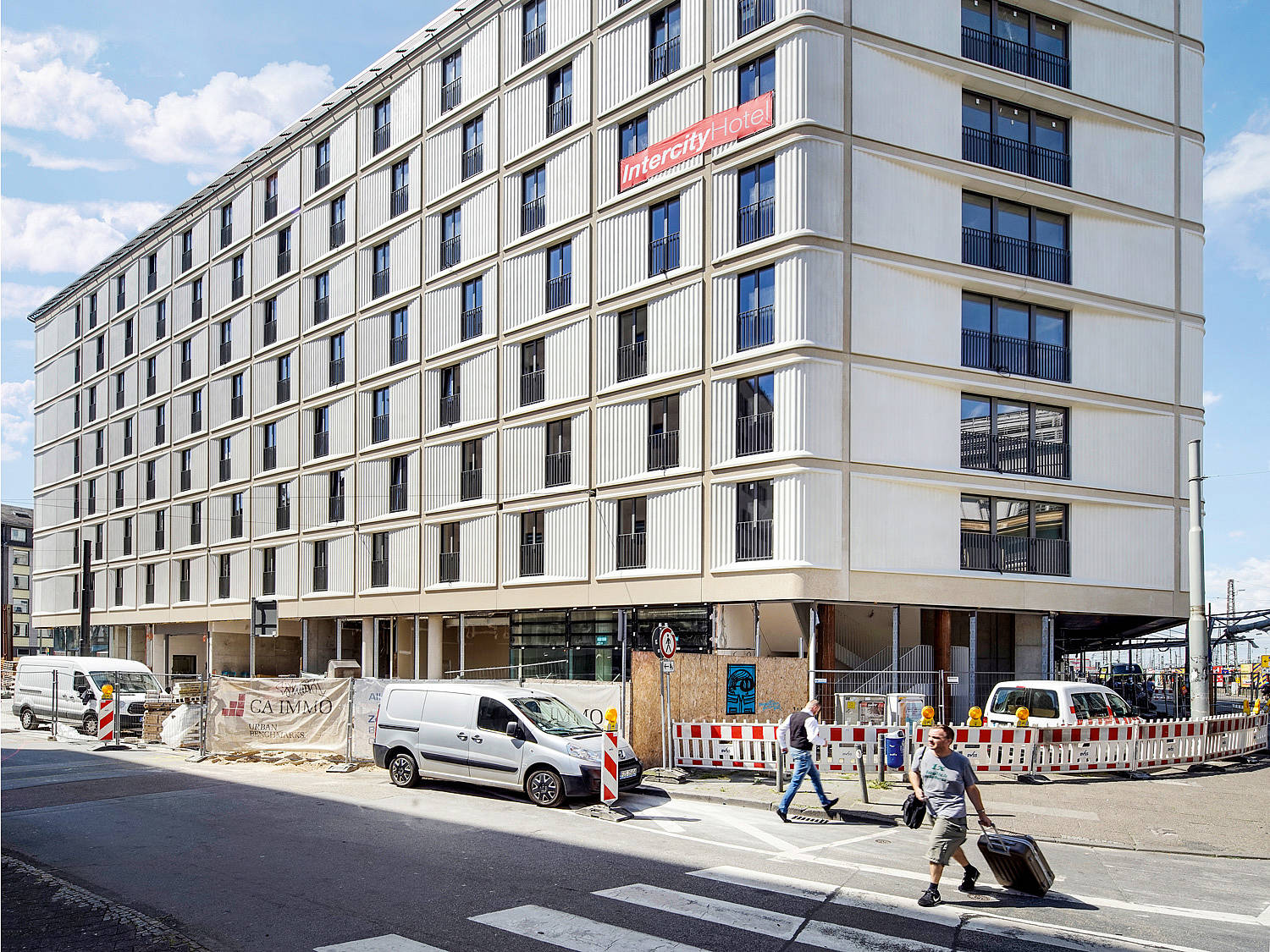 The Intercity Hotel at Frankfurt Central Station builds on the historic urban development and boasts a unique and cleverly thought-out façade.

As part of the renovation at Frankfurt Central Station, the south of Bahnhofplatz will be developed into a central traffic point and the location for a new hotel belonging to the Steigenberger Group. Until the beginning of the 1960s, there was a Wilhelminian block perimeter development on the site. The new hotel building traces the historical city plan, delimits the southern forecourt of the main railway station that is under reconstruction to the west with an appropriate building height, and returns the western end of the Mannheimer Straße urban area to the Wilhelminian style.

The cubature of the building ties in with the building blocks in the immediate vicinity. The form and design of the hotel building has reincorporated elements of the historical building it replaces, a perfume factory: the closed building structure, the oblique corners and the profiling of the façade. The eight-story building houses 400 hotel rooms and has an underground car park with 82 parking spaces. The hotel has excellent transport links to regional and national train lines and bus routes as well as to urban transport.

Due to its depth, the building has an inner courtyard. The roof structure consists of a flat roof with a technical installation area above it and an open slatted roof, the structure of which has a roof pitch of 44°, like the surrounding buildings. The cantilever of the upper floors raises the ground floor approximately 4 m to the north and south. The façade of the upper floors consists of suspended architectural concrete elements with a structured surface and an offset grid of holes. The production, delivery and installation of the curtain wall was completed by the Stockstadt am Main branch of Dreßler Bau GmbH. Their own precast plant had already worked with the architects Schneider + Schumacher on the execution planning of the almost 4,500 m² architectural concrete façade. The design by Schneider + Schumacher Architects envisaged placing the façade elements with their staggered perforated grid in relation to the guest rooms behind. The size of the finished elements corresponds to the size of the room, while the waveform corresponds to the curtains in the rooms. 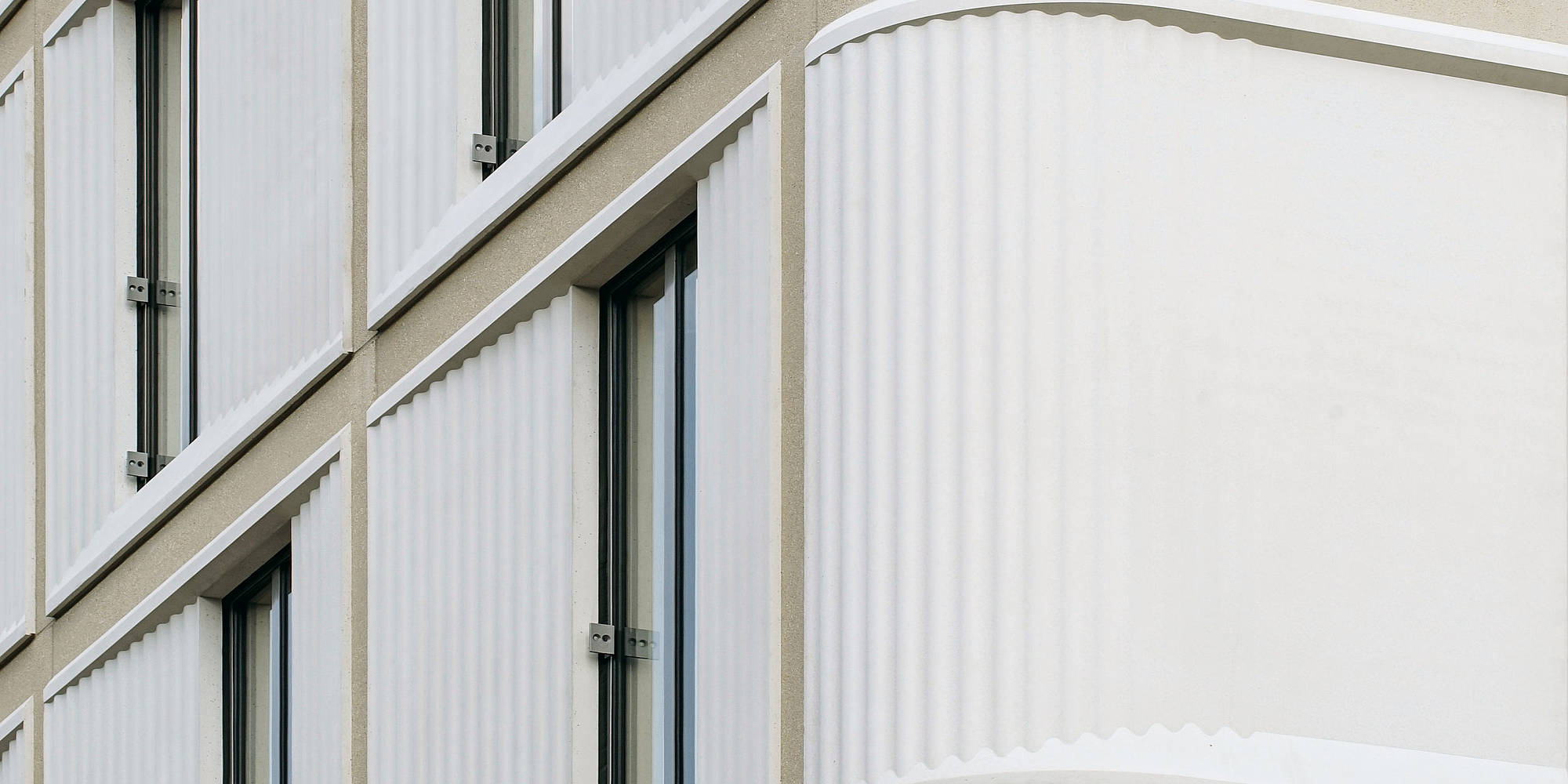 The white façade consists of smooth, wavy profiles that run towards the French windows on both sides, while the panel thickness tapers from 15 cm to 9 cm towards these openings. In order to ensure that the waves terminate with their combs at the staggered door openings, they required different wavelengths. The profiles are framed by a 25 cm wide, finely washed beige strip.

The pentagonal structure has rounded corners, which in turn lead to further waveforms. This surface design could only be achieved with structural formliners. Due to the different wave formations, catalog goods could not be used. The team relied on individual formliners from the RECKLI series UNIQUE.

The engineering consultancy Bau-Consult Hermsdorf took over the technical processing and constructed the façade elements in three dimensions. On this basis, RECKLI produced formliners for five different wavelengths, five different corner situations and two staggered door openings. For this purpose, the experts initially produced 12 positive models in the in-house joinery at RECKLI, on which 14 formliners for 400 finished elements were then cast. For the production of the pre-fabricated elements, the formliners were glued to the formwork floor to prevent shifts and changes occurring in the shaft sizes.

The production went smoothly and according to plan until the corner plates were manufactured. When casting on the vibrating tables, the surface quality did not meet the manufacturer’s expectations. A second attempt in vertical formwork achieved better, but still not optimal results. At the third attempt, the concrete was pressed into the standing formwork under high pressure, achieving the desired quality. The successful acceptance of the construction took place in April 2018.