The Dresden company Heliatek brought RECKLI on board to venture on to new paths in matters of photovoltaics: In the future, building facades shall generate solar power. With solar concrete, the partners prove that green energy can absolutely be brilliant.

The goal is nothing less than a revolution. Together with the photovoltaic specialist Heliatek, RECKLI is working on a solution for the “green building” of the future. A building that produces solar energy with its concrete facade. To do so, organic solar foil is embedded into the concrete facade parts and thus enables an especially efficient kind of energy generation. RECKLI, as the leading producer of elastic pattern formliner in designing exposed concrete, is an exclusive partner of Heliatek, the market leader in producing organic solar foils.

The organic photovoltaic technology HeliaFilm differs from the widespread technology in numerous ways and has been repeatedly distinguished accordingly. In contrast to conventional solar modules, whose efficiency drops with increasing temperature, the degree of efficiency of organic modules remains unchanged up to 176°F. Due to this property, they can be installed directly into the concrete facade without them requiring a cooling ventilation. Moreover, the modules are especially productive. The cells still work at full capacity with a very limited amount of sun of only 100 watt.  So they even generate power throughout severe overcast skies and thus have a yield advantage of ten to twenty percent over the conventional solar modules.

Solar concrete can make an important contribution to improving the CO2 balance. The industry is on the search for new, more innovative solutions. After all, invariably new national energy-saving regulations and EU directives stipulate the maintenance of increasingly strict energy standards in new buildings. “In addition to the performance of organic solar modules, we were especially impressed that the technology is green through and through,” says RECKLI’s managing director, Dr. Bernd Trompeter.

“The cells do not include any toxic substances and can be disposed of without hesitation as they predominantly consist of PET synthetics,” explains export director Peter Henning. He came upon Heliatek while researching the topic of solar energy and then contacted them. RECKLI proposed to the company from Dresden, to install their technology on their house walls--an idea that even surprised the researchers at first. The benefit, however, is evident; by applying the solar concrete to the facades, a much larger surface can be used to generate power. “That way, the entire building shell can be used to generate green, solar power,” explains Heliatek-director Thibaud Le Séguillon. The scientists, still searching for strategic partners, enthusiastically shook on it.

RECKLI is working on a solution for the Dresden company, on how to integrate the foils into the pre-cast concrete elements. The modules are placed into a depression in the concrete elements and connected to the technology behind the curtain-walled facade. The advantages of HeliaFilm: While conventional solar modules weigh in at between 10 and 15 kilograms per square meter, the weight of Heliatek modules barely amounts to 1lb. per square foot.  The cells can be installed correspondingly flexibly.  The first test models have already been produced. In November 2014, a trial system was commissioned in China. “The market in China is incredibly quick and is rapidly growing,” says Henning.

In early 2015, a trial setup followed at the plants in Herne, to be able to locally study the ways of installing modules in concrete facades and their behavior over time. As soon as the product is market-ready, it will be available in variable dimensions. The customer can additionally choose between the color gray, blue and green as well as various degrees of transparency. As the modules are flexible up to a radius of .40”. They can even be applied in patterned concrete surfaces.

“Exposed concrete gains in aesthetics thanks to our design possibilities and in function with the help of HeliaFilm,” states Henning. Heliatek-director Le Séguillon, too, sees a chance in the partnership with RECKLI to unify ecological and design demands of the highest degree: “We are convinced that our facade solutions will quickly become the first choice for architects once it is launched on the market.” 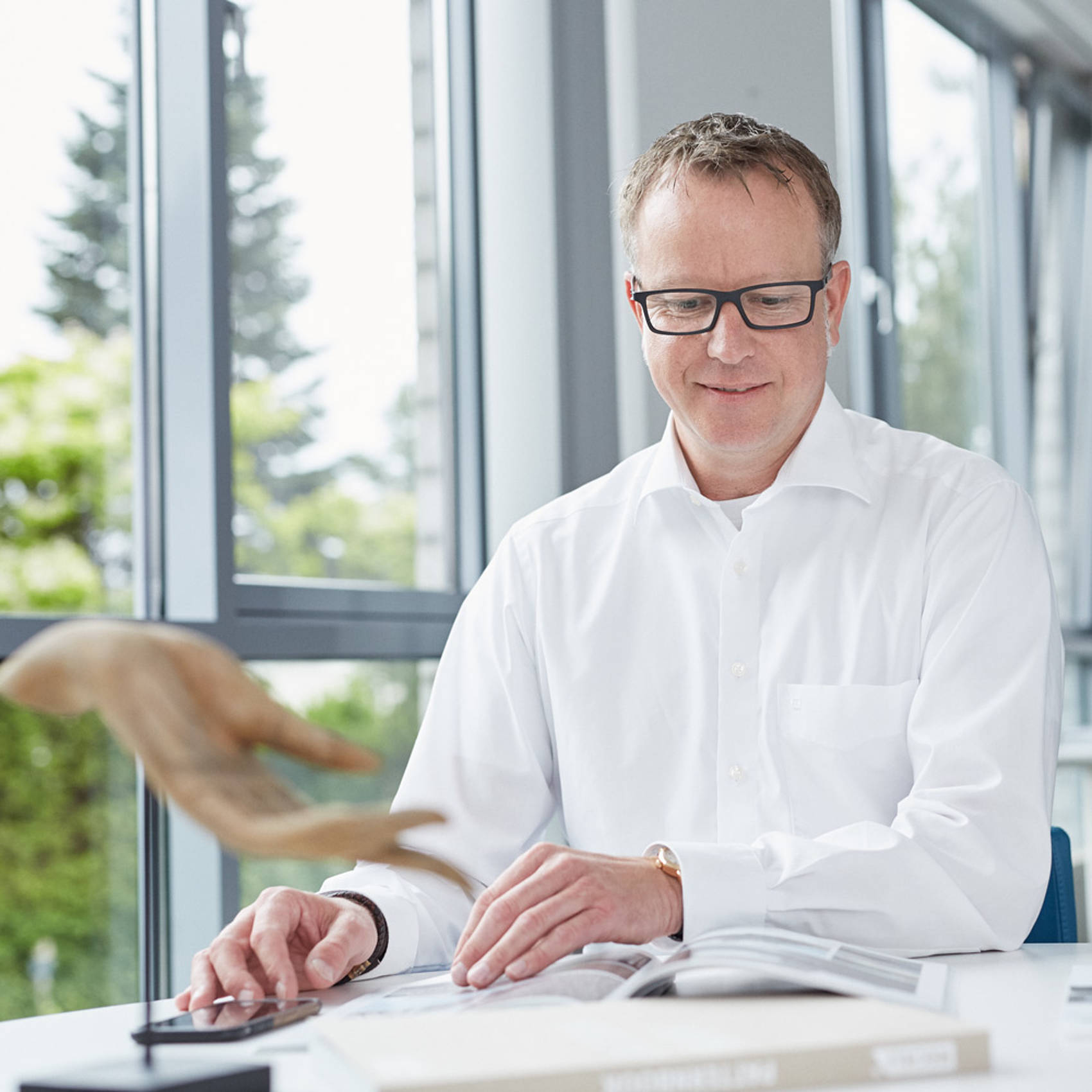 Peter Henning, RECKLI International Sales Director: “Exposed concrete gains in aesthetics thanks to our design possibilities and in function with the help of HeliaFilm.”

Heliatek is the leader in the field of OEE (Organic Electronics Energy) holding the world record efficiency of 13,2%.  Through both its leading edge material development and its proven capability for volume manufacturing Heliatek is the first company to begin commercialization of large area OPV solar film.